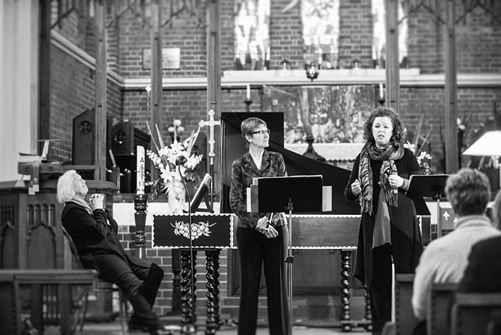 University House members and guests are invited to the 2019 Early Music Dinner.

Words and music, when combined together, tell powerful stories. Creating an atmosphere of an eighteenth century musical salon, Ensemble Solasta engages audiences with eloquent vocal and instrumental music, igniting the imagination and enriching the emotions. Ensemble Solasta celebrates the ebb and flow of nature and humanity, with the instrumental colours of flute, cello and harpsichord complementing and contrasting poetic vocal expression.

The musicians in Ensemble Solasta have each made significant contributions to Early Music performance in Melbourne, Australia and beyond. All have a long-standing association with The University of Melbourne Early Music Studio, as teachers, performers and researchers. Scottish -born mezzo-soprano, Vivien Hamilton, has performed in the United Kingdom and in Australia with groups such as BBC Singers, Kent Opera, Ludivoco’s Band, e21, La Compania and Auncient Hermony. She is a dedicated curator of musical programmes inclusive of a wide range of styles, from Mediaeval to 21st century, and teaches tertiary vocal students.

Alison Catanach is active as an orchestral and chamber musician in Melbourne, often playing with groups such as Melbourne Baroque Orchestra, St John’s Bach Cantata programme, Australian Chamber Choir and the choir of Newman College. She is researching flute playing in England in the eighteenth century as part of a PhD at The University of Melbourne.

Ann Morgan is one of Australia’s pre-eminent harpsichordists, performing and recording widely as a soloist, continuo and chamber musician. She has performed with soloists of world renown including Eva Legune, Geoffrey Burgess, Walter van Hauwe and Weiland Kuijken. Ann plays continuo for the Melbourne Chamber Orchestra.